Reading lost their 100 percent home league record as they fell to a comprehensive 3-0 defeat to Sunderland.

The Black Cats dominated most of the first half without creating too much until Patrick Roberts struck with two goals in as many minutes just before the interval.

Jack Clarke effectively settled the issue in the 69th minute, latching onto a superb Dan Neil cross to slot home.

Reading had won all their previous four league games at the SCL Stadium and had also won four of their past five Sky Bet Championship outings.

Sunderland had collected 11 points from their opening eight fixtures in the second tier.

New head coach Tony Mowbray, who replaced Alex Neil late last month, had overseen a win and a loss in his two games in charge.

A minute’s silence as a mark of respect to the Queen was impeccably observed before kick-off, with the national anthem following.

Sunderland started brightly, but without injured five-goal top scorer Ross Stewart struggled to make any headway into the home area.

A swift, promising break from Reading ended with Jeff Hendrick supplying a poor pass to Andy Yiadom and the chance went begging.

Sunderland responded with Neil volleying wildly over – the first shot of any description in the match after 23 minutes.

He cut in from the right – after being released by substitute Elliot Embleton – in the 39th minute and curled a clever effort past Reading goalkeeper Joe Lumley.

It was a similar finish two minutes later, with Roberts beating Lumley for the second time with a low drive into the bottom left-hand corner of the net.

Roberts was clearly in the mood for a hat trick and, early in the second half, he again drifted in from the right flank. On this occasion, though, his attempt lacked power and Lumley saved easily.

Reading responded from a Tom Ince free-kick but, after Sunderland had failed to clear it properly, Tyrese Fornah blazed well off target.

While the visitors had been mostly content to sit back and protect their lead, they were still dangerous on the break.

So it proved again in the 69th minute when Neil provided the perfect crossfield ball for Clarke to sweep past Lumley.

Reading had little answer towards the end, with Sunderland holding on comfortably for their fourth victory of the campaign.

What the managers said… 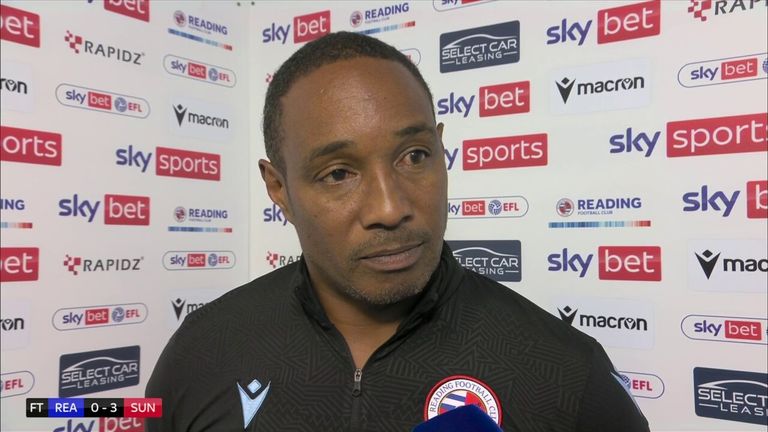 Reading’s Paul Ince: “Maybe, in a perverse sort of way, it’s a good result for us. Because it gets everyone back on the ground. It gets everyone grounded. People were getting carried away after just eight games. You could sense that, I could sense that. Our target is to stay in this league but, such was our good start, people started talking about the play-offs and stuff like that. But that’s rubbish. Our performance looked a tired one and a nervous one. It’s just disappointing, although these things do happen.

“I said to the lads a couple of days ago that ‘we need to be on it’. We’re not good enough not to be on it. But from the first minute, we were nervous. We defended too deep, we didn’t ‘t won the second balls, we weren’t competitive or aggressive enough. All the things that have got us where we are now were not there tonight. That’s so disappointing.” 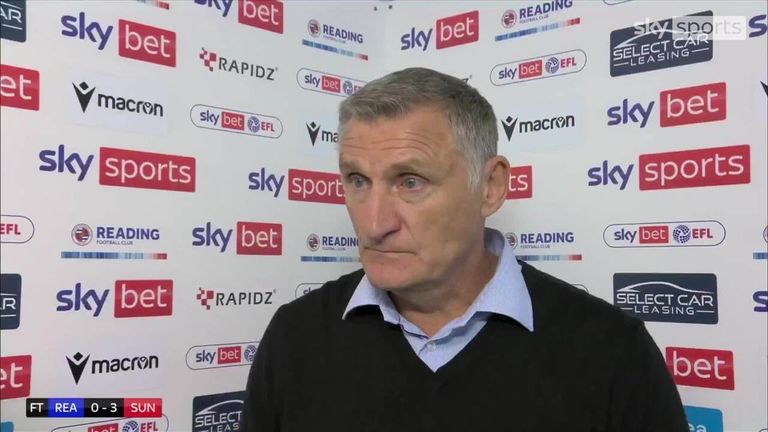 Sunderland head coach Tony Mowbray says his players stepped up their performance in the 3-0 win against Reading.

Sunderland’s Tony Mowbray: “I think that we controlled the game tonight with the ball rather than with physicality. The team played well and I spoke this week that people had to step up and we had to score goals from different places. Patrick grabbed that nettle and did just that for us. And Jack Clarke as well.

“It was a good display. Despite their unblemished home record this season, we looked at them and believed that, if everyone did the basics well, we could win tonight. It’s good to score three goals in front of all our (travelling) supporters . It’s amazing to see how many people had come down from Sunderland on a Wednesday night. But that doesn’t really surprise me about this club. It’s a massive beast, really, and we just need to keep trying to feed it.”