More than 28 lakh Indians went abroad for employment between January 2020 and July 2022, government data analyzed by CNN-News18 shows. The data also reveals that at least 4.16 lakh Indians have left India for private jobs in the Emigration Check Required (ECR) countries during the said period.

The ministry of external affairs said in a written statement in the Lok Sabha that since there’s no specific index for capturing the category for Indians going abroad for employment or work purposes, the purpose of travel “is usually captured manually based either on their verbal disclosure or the type of visa of the destination country produced by them at the time of according immigration clearance.”

The ministry added that Indians who verbally disclosed their purpose of visit either as employment/work or produced employment/work visa of the destination country while going abroad between January 1, 2020, and July 27, 2022, were 28.51 lakh.

The numbers suggest that there has been a consistent increase in the tally. In 2020, around 7.15 lakh Indians went abroad for work, while in 2021, this increased to 8.33 lakh. This year, up to the end of July, 13.02 lakh Indians had left the country for work.

In another reply, the ministry said it maintains the data in respect of Indian workers holding ECR passports who emigrate through legal channels (e-Migrate portal) to any of the ECR countries for overseas employment. Out of the total 4.16 lakh Indians, 1.31 lakh, or nearly 32 percent, were from Uttar Pradesh alone. It was followed by 69,518 from Bihar. 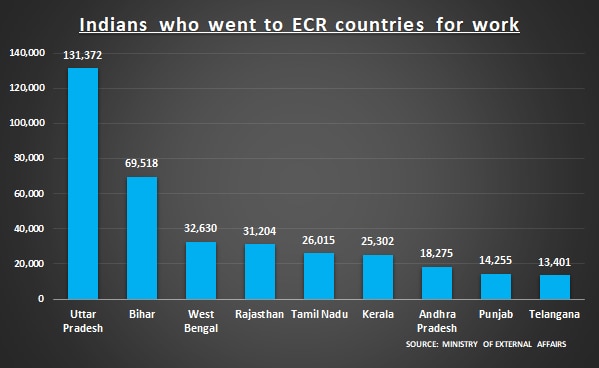 It said that the Emigration Act, 1983, provides that no citizen of India shall migrate unless he or she obtains emigration clearance from the Protector of Emigrants.

Similarly, it has been recognized that certain countries (currently 17) do not have strict laws regulating the entry and employment of foreign nationals. They also do not provide avenues for grievance redressal. Thus, they have been categorized as ECR countries. 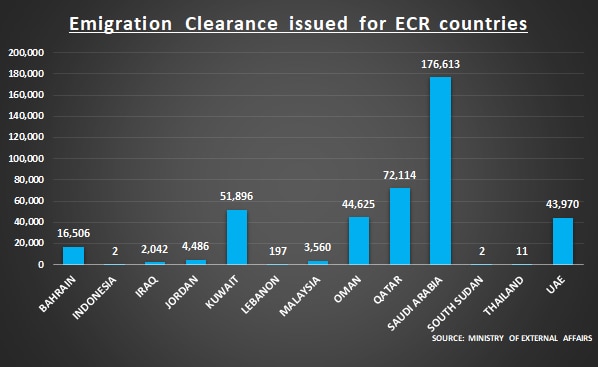 This rise in numbers was reported after many Indian workers, particularly in the Gulf, returned to India due to the Covid-19 crisis. At least 4.23 lakh Indian migrant workers returned from 14 ECR countries between June 2020 and December 2021, as per records available in the eMigrate system. This included 1.18 lakh from Saudi Arabia and 1.52 lakh from the United Arab Emirates, the ministry data shows.