New Burnley manager Vincent Kompany will waste no time getting to work at Turf Moor as the Belgian looks to inspire an immediate return to the Premier League.

The relegated club had been in talks with former Manchester City captain Kompany regarding their managerial position, following the decision to part company with long-serving boss Sean Dyche last month.

Mike Jackson stepped into the hotseat as a caretaker manager but was unable to keep his team in the top flight, with a 2-1 final-day defeat at home to Newcastle consigning the Clarets to relegation to the Championship.

The former defender left his post as Anderlecht manager last month following a three-year spell in charge, but he has jumped straight back into the dugout.

Sky Sports looks at what Burnley fans can expect from Vincent Kompany, the manager, and whether he can mastermind an immediate return to the Premier League …

What type of manager is Company?

When a 33-year-old Kompany took his first tentative steps into management as Anderlecht’s player-coach in June 2019, he said he was “no Pep Guardiola”, but the four-time Premier League winner is a student of the game who has learned a lot.

“It was like being at university every day. He explained everything with such clarity and I learned an enormous amount from him,” Kompany said of his experience working under the Catalan. “I am no Guardiola by any means, let me make that clear. But I think I was a good student.”

One of Kompany’s best qualities is making young players better and giving them confidence, brought home in a touching montage of a visit to Anderlecht’s RSC academy following his departure.

Sambi Lokonga earned his big-money switch to Arsenal while Kompany took Lukas Nmecha on loan from Manchester City last season and the striker scored 18 goals in 37 appearances. Given the closer proximity, he will certainly be monitoring promising talent with a view to more temporary deals.

West Ham academy product Josh Cullen brought an end to his 15-year spell at the club in the summer of 2020 to work with Kompany, and the Republic of Ireland midfielder says comparisons can be drawn between the Belgian’s managerial style and that of Pep Guardiola.

“Working under Vincent Kompany was a massive factor in me coming here,” Cullen told Sky Sports. “His career in the Premier League as a player speaks for itself and the managers that he worked under. To come here and pick his brains every day, to learn and develop under him has been fantastic. 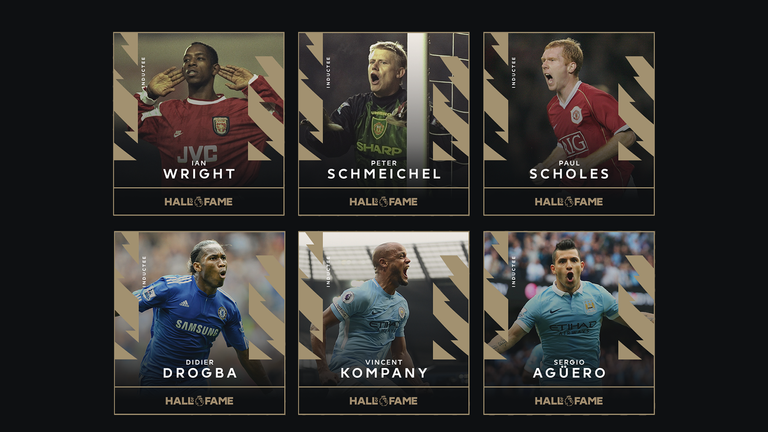 Six more players have been inducted into the Premier League Hall of Fame, which already includes Wayne Rooney and Patrick Vieira

“I’ve loved every day in training trying to take in as much information as I can to improve my game as an individual, learning more about the game tactically. It’s been thoroughly enjoyable.

“It’s hard for me to say just how similar he is to Guardiola as I don’t know exactly how Pep works day in day out, but some of the ideas if you watched our games and the style we try to play, you’d see similarities between Guardiola’s teams and the way our manager here sets us up and tries to play.

“The manager has been brilliant for me and we’ve enjoyed working under someone of his pedigree as a player and the knowledge he has of the game.”

The City legend has been keen to return to the North West in order to be closer to his wife Carla’s family, and opted for the Turf Moor post despite interest from Bundesliga team Borussia Monchengladbach.

Parachute payments will certainly help soften the blow, and the Company will relish the atmosphere of two East Lancashire derbies against Blackburn. After Derby boss Wayne Rooney was also linked to the role, chairman Alan Pace has clearly targeted a young and hungry manager with a pull factor.

In some ways, it is the galvanizing effect the former Manchester United striker had on the Midlands club, creating a siege mentality when it felt the world was against him and his team, that can be viewed as a source of inspiration for Kompany.

Burnley are ready to take a risk on him and vice-versa. One of the Premier League’s greatest defenders pitching up at Turf Moor feels a left-field Hollywood appointment but it is one that suits all parties.

Was Kompany successful at Anderlecht? 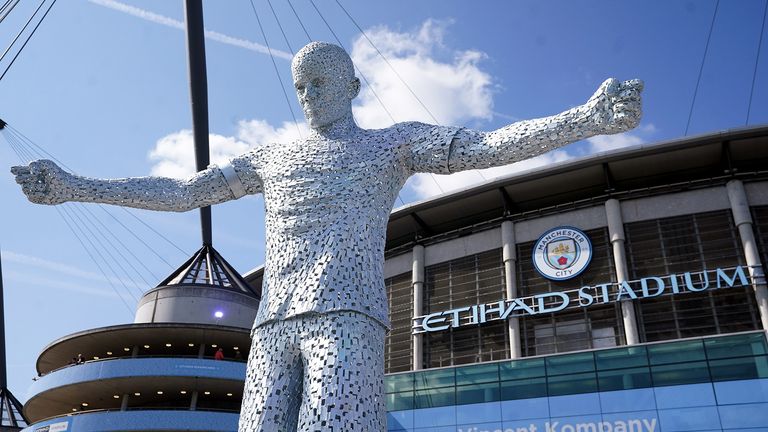 Kompany was first named player-manager of Anderlecht after leaving the Etihad in 2019, but after presiding over their worst start to a league season, he returned to playing duties for the rest of the campaign.

Finishing third in the Belgian top division would not historically be viewed as a success given the club’s stature in their homeland, but Kompany belatedly revived Anderlecht’s fortunes having finished in eighth and fourth position respectively in his previous two seasons.

CEO Peter Verbeke said in a statement that “Vincent was an essential part in rebuilding a renewed Anderlecht” but it was not a view shared universally within the club’s hierarchy.

A sign of the friction that existed was seen when owner Marc Coucke posted on Instagram in April: “How to kill an entire season in one week” following a poor start to the play-offs, and defeat in the Belgian Cup final to Gent.

It was not quite the ideal of ‘Champagne Voetbal’ and given the expectations as Belgium’s record champions, some may argue this is a case of out of the frying pan and into the fire.

There are parallels and therefore logic, however, between the attractive possession-based approach that Kompany instilled and the shift Jackson started at Burnley.

What can Company expect at Turf Moor? 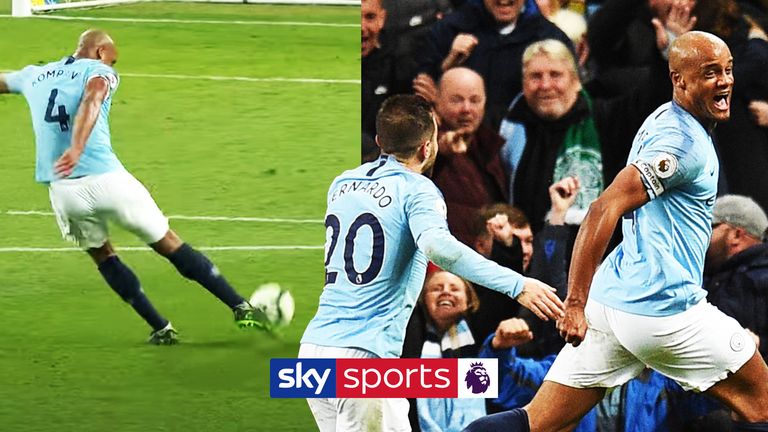 Vincent Kompany being appointed Burnley manager, we take a look back at his wonder strike against Leicester which left Manchester City with one hand on the Premier League trophy in 2019

With players likely to leave and debts to repay, Clarets supporters fear a bleak future. After six years in the Premier League, the home defeat to Newcastle on the final day consigned them to the Championship for the first time since the 2015/16 season.

Nine players are out of contract this summer and Burnley may be forced to turn to an academy that is at risk of being downgraded.

A significant proportion of a £ 65m loan owner ALK Capital took out when buying the club must be paid back following the club’s relegation due to a clause inserted in the deal, so these are far from ideal circumstances that Kompany has inherited.

Yet the 36-year-old is already used to handling turmoil as a manager. When he first took up the Anderlecht post, the club were coming to terms with there being no European football for the first time in 56 years as unrest reigned off the pitch.

There were violent protests, crowd trouble, flares on the pitch, insults and banners protesting against Coucke’s ownership, but the arrival of one of the country’s biggest icons of the past 30 years papered over the cracks of mismanagement.

Kompany will not be able to afford such a luxury at Burnley, where he will struggle to shake off being viewed predominantly as a Premier League legend who won four titles, two FA Cups and four League Cups with City.

Patrick Vieira arrived at Crystal Palace with a similar reputation but his fine first season at Selhurst Park is changing people’s perceptions, and Kompany will now hope to do the same.

Who can Company build his team around?

One of the immediate challenges facing Company building a team capable of earning an immediate return to the Premier League after long-serving captain Ben Mee led a mass exodus of 14 senior players earlier this month.

Nathan Collins, whose impressive performances for Stoke City in the Championship earned him a move last summer, has looked the part for the Republic of Ireland and can be counted on.

James Tarkowski will leave when his contract expires amid interest from Everton, but there are not too many names who will command an exorbitant fee. Goalkeeper Nick Pope is the crown jewel by some distance and will be expected to attract Premier League interest, while Maxwel Cornet, 25, and Dwight McNeil, 22, have good sell-on value. 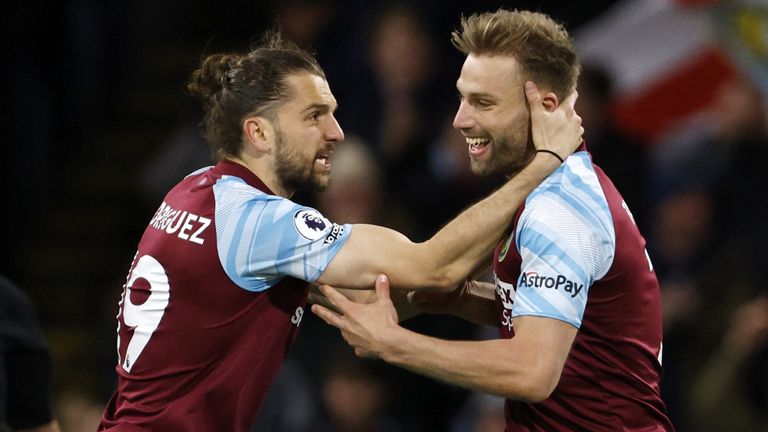 Matej Vydra is a player who has shown himself to be very capable in the Championship previously with Derby and Watford, but it is too early to say with any certainty if Kompany will have funds available in order to reshape his squad. Burnley’s owners are seeking more loans to help them service the existing debt.

At 28 years and 343 days, Burnley had the second-oldest average starting age in the Premier League last season, only narrowly behind Watford. Across the 38-game campaign, the Clarets made just 62 changes to their starting line-up and used 23 players, a league low.

Given the heavier fixture schedule, Kompany knows additional bodies are needed besides the inevitable player sales.

Dyche led Burnley straight back to the top-tier as champions in 2016, his second promotion as manager, and that was borne out of sensible spending and a long-term vision when they were relegated from the Premier League a year earlier.

There will be some supporters who feel he would have been the perfect man to negotiate the rigours of the Championship at a time of significant rebuild – but the financial calamity of relegation this time means it might just have easily tarnished his legacy.

Post-Dyche Burnley was always going to be a strange concept given his nine-year association, however, the club’s U23 boss Mike Jackson demonstrated during his spell in interim charge how a more progressive playing style could be reached without losing any of the aggression fostered under the old boss.

Dyche was synonymous with Burnley just as Kompany is with City, their battle-hardened captain who has swapped picturesque chalets in leafy regional parks on the outskirts of Brussels for the Manchester drizzle that has brought him so much peace.

Standing at 6ft 4in, his presence is intimidating but his demeanour reassuring. Jackson expressed how the pain of relegation would “always be there”, but the process of shifting from Dyche’s pragmatic tactical strategy has not been an onerous one, and Kompany’s ambition to succeed can make Burnley’s return to the Championship a short stay.

Ten points in Jackson’s first five games as caretaker manager were gained through shorter passing and greater possession. He would constantly refer back to the “togetherness” of his group, but there was much more besides the intangibles; Burnley’s xG per game rose from 1.05 to 1.97 and their xGA dipped from 1.72 to 1.54. Their shot count went up from 10.2 to 14.0 per game and shots decreased from 16.2 to 13.4.

These figures were not sustained as one point was taken from the final four matches, but Kompany will look to tap into how Jackson made Burnley less direct and more pleasing on the eye.

Sheamus serves as an honorary starter for the NASCAR race