Jason Sudeikis was seen for the first time since his ex-wife Olivia Wilde was served with custody papers in London on Friday, May 6. The actor filming his AppleTV show Ted Lasso in the sighting, and he was dressed in costume as the popular, titular character. Other than the photos of Jason, 46, in costume, he was seen hanging out behind-the-scenes in a more casual outfit. 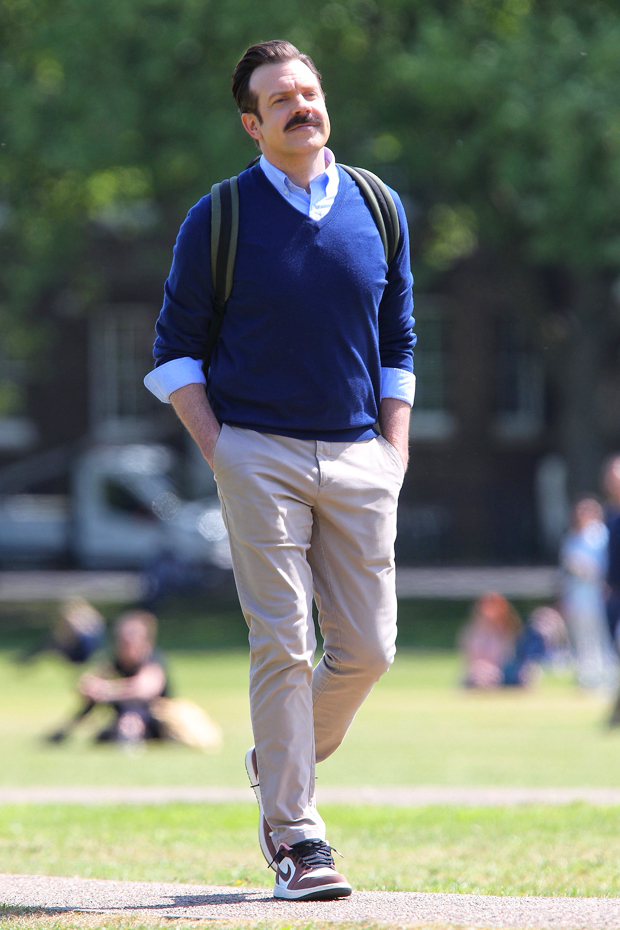 The actor was seen in character on-set filming the AppleTV series. (SplashNews) In one photo, Jason was dressed in the typical outfit that fans of the show know. He sported a dark blue sweater over a button-down shirt with a pair of khakis and Nike sneakers. Of course, he had his facial hair shaved into the signature mustache that the character is known for. In one of the behind-the-scenes looks, he rocked a pair of blue pants and a green jacket, with a backpack behind him.

Jason’s ex-wife Olivia was served legal papers while speaking on-stage at CinemaCon in the middle of a presentation where she was speaking about one of her new movies. The 38-year-old actress was handed a large legal envelope at the Las Vegas event and realized that they were custody papers and continued presenting as part of the convention. Olivia and Jason share a son Otis, 8, and daughter Daisy, 5.

A source revealed to HollywoodLife that Jason wasn’t told that the House actress would be served on-stage. They said that he “had no prior knowledge of the time or place that the envelope would have been delivered as this would solely be up to the process service company involved.”

Another source close to the situation told HollywoodLife exclusively that Jason could not have expected her getting served in this way. “Jason was just as shocked as the rest of us when he found out Olivia was served at CinemaCon, ”they said. “Jason would never in a million years try to shame Olivia. She’s the mother of his kids and despite their relationship not working out he would never intentionally embarrass or humiliate her. ”