UFC star Justin Gaethje has launched a verbal assault on Conor McGregor, claiming the Irishman is “scared to fight him” and has “lost his confidence” and made “chicken s ***” decisions “.

Gaethje, who challenges Charles Oliveira for the UFC lightweight title on Saturday night, told Sky Sports’ Ed Draper that he would love to make McGregor “disappear from the sport”.

But the American believes his fellow 33-year-old will duck a potential clash with him and instead look towards welterweight champion Kamaru Usman when he returns from injury.

McGregor broke his leg during his trilogy fight with Dustin Poirier last year, losing via technical knockout in the first round after being unable to continue.

“I think he’s ab *** h. I think he’s scared to fight me and his coach is smart enough not to let that happen.

“These guys have had their eye on me forever and they are too chicken s *** to pull the trigger. He won’t fight me, he’ll fight Kamaru [Usman] before he fights me.

“After I fought Donald Cerrone and knocked him out, he [McGregor] picked Cerrone to fight.

“Do you think that was a chicken-s *** choice or do you think it was a choice you make when you want to be the best in the world? Nobody called [McGregor] out.

“If you lose to me there is only one way to lose to me and that’s by never coming back.

“Especially with that man, I would take every piece of his confidence, shove it in the garbage disposal and grind it up for him. That’s who I am and how I play.

“If he knocks me out, he is right back on the horse. 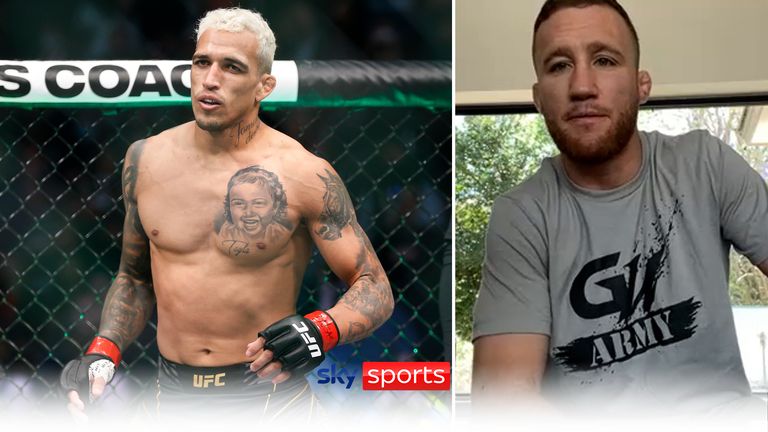 Justin Gaethje says although he has a lot of respect for Charles Oliveira, he feels he’ll stop him to become the UFC Lightweight Champion.

“Most likely he won’t and most likely he takes a beating and has to show the world the b *** h that he is, that he always has been.